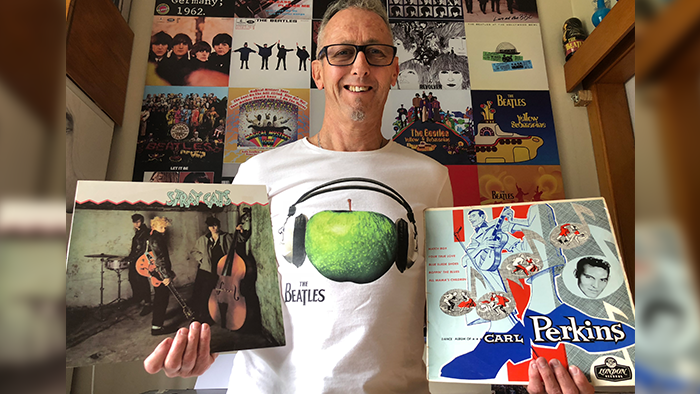 A journey into the history of rock and roll that began on radio six and a-half years ago shows no sign of nearing an end.

Dunedin man Warren Voight hosts 360 Degrees ’Round Wazrock on OAR FM Dunedin, an hour-long exploration of a music genre he has dedicated a lifetime to, along with a fair amount of spare change.

With a personal collection of albums and singles, 78s, CDs, books and other ephemera that numbers around 5000 items, and a “wants list” that never seems to shorten, Mr Voight is not short of material for his radio show and podcast. It is made to be shared, he says, because “music is part of who we all are”.

From bouncing on his father’s knee to the sounds of Rock Around The Clock by Bill Haley and His Comets to purchasing his first long player 26 Solid Gold Rock ‘n’ Roll Hits as a teen, Mr Voight’s earliest musical experiences remain sharp in his memory. Teenage years spent listening to glam rock and heavy rock peaked a curiosity in the roots of these more flashy forms of the genre.

“It all started with Appalachian mountain music, the seedbed of what we know as modern music, along with the Jewish music hall tradition and other early forms.”

First going to air in September 2011, Wazrock had explored those country music influences before traversing blues, bluegrass, swing, the big-band era and the jive scene. It was then on to early rhythm and blues, rockabilly and the English beat groups.

“I’ve predominantly focused on that side of the Atlantic, so far. Now the show is heading into glam rock, which had a big part to play in reviving the fun side of music. It was getting a bit dirgy there in the seventies, with prog rock and the rest of it.”

The show would then “double back”, with future episodes exploring the American beat groups and bands of the 1970s. New Zealand and Australian acts would also feature, as there was “a couple of years’ worth in that”.

“I’ll look into all the main artists, because they’re always important, but I also want to touch back on the lesser artists that often get overlooked. It’s never ending, really.”